Watermelon Beer and a Good Run

I think I found my beer calling… 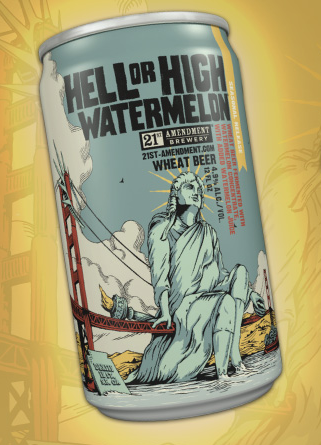 Heaven in a can?

At the beerfest last week I tasted this gem (tasted it probably 10 times before I felt like the people serving the beer started to recognize me) and I was instantly smitten. When I saw it in Kroger I almost did a happy dance right then and there. Instead I scooped up a six pack and bolted through the self check out. Forget waiting in the damn deli cheese line…mama needs her watermelon beer.

In running news, I accomplished the best 6 miler of my life. For the Saturday long run, my “team” with the Half Marathon Training Team, the Falcons, is supposed to start running at 7:15am. I had some last minute bathroom needs to take care of before I left the house (sorry, TMI), so I ended up arriving at the meeting point at 7:10, a little later than I’d hoped. I figured I still had 5 minutes to spare, that I was early. But NO. Our leaders decided to leave early and the late comers were left standing there a bit clueless. Luckily there were several other teams leaving at the time so I jumped in with the Zebras. I spent the entire run attempting to find my friend with the Falcons so the time passed quite quickly. It was also pretty awesome to pass EVERYONE…something I’m definitely not used to. I didn’t end up reaching my friend until mile 5.98, but the run was pretty awesome in my eyes.

9:12?! I’ll take that any day. I felt strong the entire time and loved every minute. It looks like running in the morning may be possible for me after all…at least if I’m chasing people the entire time.

I’ve got a watermelon beer calling my name – over and out!