← The Story of Us, Part Deux
Race Pics →

Welcome to PR City!! I wasn’t sure if it was going to happen, but I PR’d this weekend at the Run for the Dream Half Marathon in Williamsburg, VA. This was my 2nd Half Marathon and my only goal was to beat my previous (and only) time of 2:18 something.

So here’s the lengthy and awesomely photo-filled recap of how I got there.

A bit of a back story…on Tuesday of last week I went to Bootcamp per usual and during our warm up lap around the shopping complex my left inner shin/calf was KILLING me. It seriously hurt like crazy. I’ve never felt this kind of pain before, and I was instantly worried about the upcoming race. It sort of loosened up as I completed the lap, but it pretty much bothered me all of boot camp. I came home, iced it and took some Advil. On Wednesday I woke up hoping to run 4 miles before work, but at mile 1.5 I threw in the towel and walked home. I spent Wednesday popping Advil and massaging the area. I played volleyball that night and was still in pain. Come Thursday morning I woke up expecting to feel the burn, but I literally felt NOTHING. It was like the pain magically went away. Needless to say I was happy but I continued to pop the Advil, massage and ice as much as I could. Friday rolled around and I decided not to run, just in case.

Basically this weird little calf thing meant that my taper was non existent…I literally didn’t run at all from Sunday-Saturday. I hopped on the treadmill of our hotel on Saturday morning and ran a SLOW 3 miles just to get my legs going in preparation for Sunday AM. It seemed to work and I didn’t feel any pain, mostly just tightness.

I am about 90% sure it was a shin splint, and I am happy as all hell that it went away by the time the race started. I knew I’d drag myself across the finish line no matter what, but I was SO THANKFUL to be pain-free during the race.

Now for the juicy fun stuff.

I bought my entire race outfit the day before the race at the Nike Outlet (outlet shopping the day before a race is also an endorphin rush). I know this is a serious no-no in the running world, but I love my other Nike products and knew these would be just fine. Also, I’m not one to feel bothered by annoyances on my clothing.

I ended up in the yellow instead of the pink. I absolutely love the yellow top. It was light weight, bright and kept me cool the entire race.

Sunday morning I woke up naturally at 6am and took my time getting ready. I hate half a bagel with peanut butter, chugged some water and took more Advil. I woke up the rest of the crew by 6:40 and we left the hotel at 7am, just 30 minutes before the start. Williamsburg is small, so it was super easy to get to the start of the race with plenty of time to spare. They had a shuttle system but we opted to get dropped off. We hit ZERO traffic and got dropped about .5 miles from the start which was perfect for a warm up. Our hotel was only a mile away anyways so this whole process was ridiculously easy. 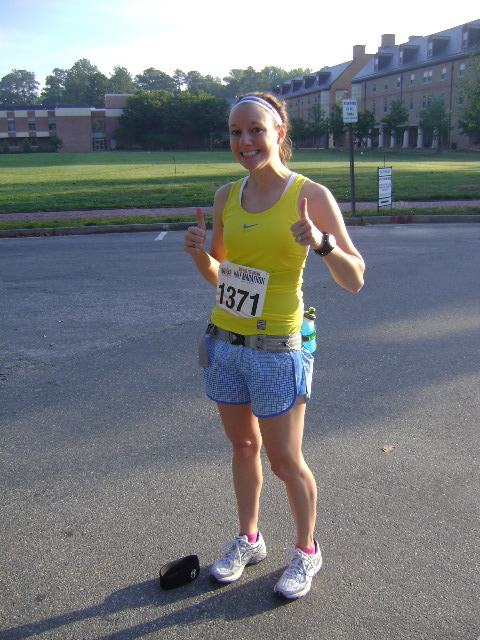 My brother Tristan and I had plenty of time to stretch, take photos and mill around.

The race started promptly at 7:30am after the usual race pomp and circumstance. I was a fan of the colonial drum/fife band and the choir that sang the National Anthem. With only 2,700 runners we easily found space to get into the groove.

The first 4 miles of the race were awesome despite the fact that it was already 70 degrees and humid. We ran through Colonial Williamsburg and got to take in the sites. Neither of us had ever been there before, so we had a lot of fun snapping photos of “old things” and each other. This part of the race flew by. 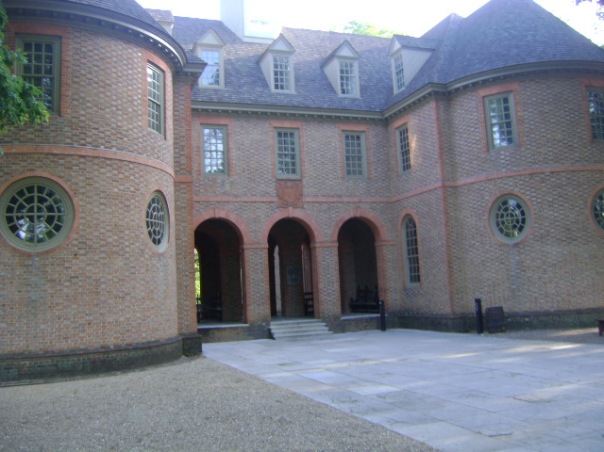 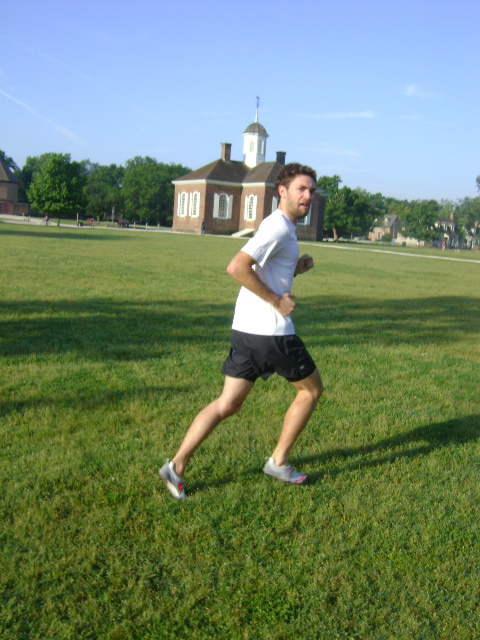 We were loving the scenery. And frolicing in the grass.

We decided to document my fuel belt malfunction. 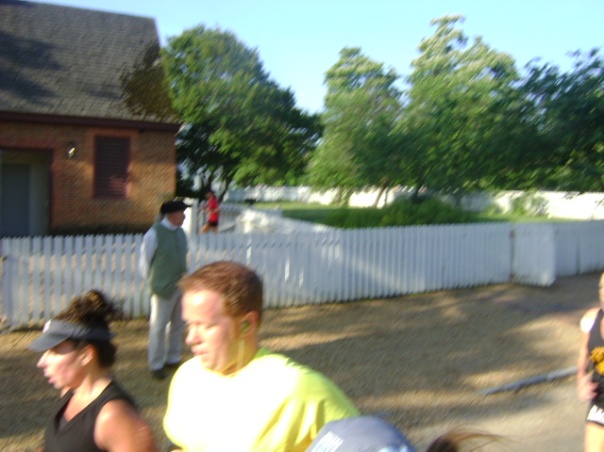 Around mile 4 things started to get boring. And hilly. To keep ourselves sane we decided it would be fun to take a photo at every single mile marker from that point forward. This tactic was an amazingly helpful mental boost because it seemed to make every mile fly by.

Really excited...and notice how awesome my Nike top is from the back.

Between miles 4 and 6 several things happened. We came across a random bear mascot, we encountered a really l.o.n.g hill and the course went from paved roads to gravel. 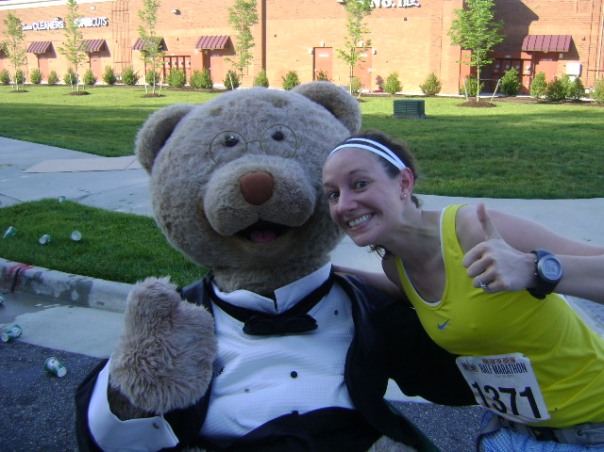 Blurry gravel (and a hill). 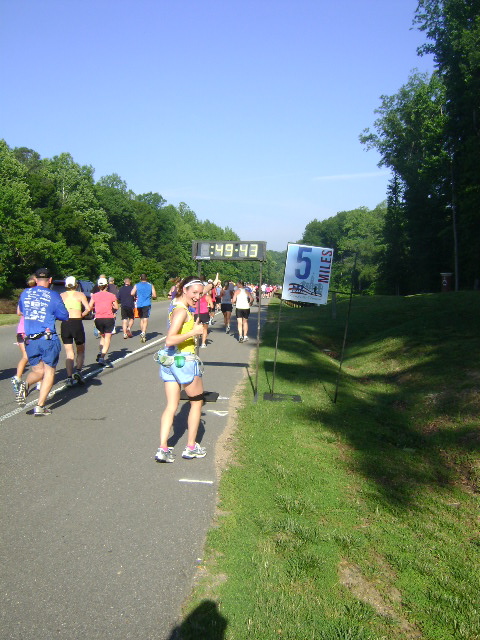 Mile 5 welcoming us to a long and sun-drenched hill.

Then we decided Tristan would take the evens and I'd take the odds.

At this point the course went out towards the river and the race seemed to drag on and on. This was a long out and back and it consisted of an entirely CONCRETE road. Can you say knee pain?! I was not a fan of this portion of the race simply because of the concrete. However I kept a positive attitude and had fun anticipating the next photo opp. Eventually I started taking little running breaks on the grassy side part of the road which I think really helped my legs in the long run. 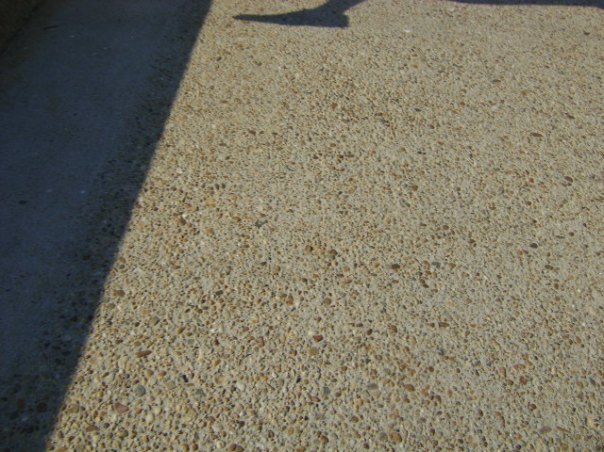 Concrete, we do not appreciate your hardness.

Another concrete mile (and some hills). 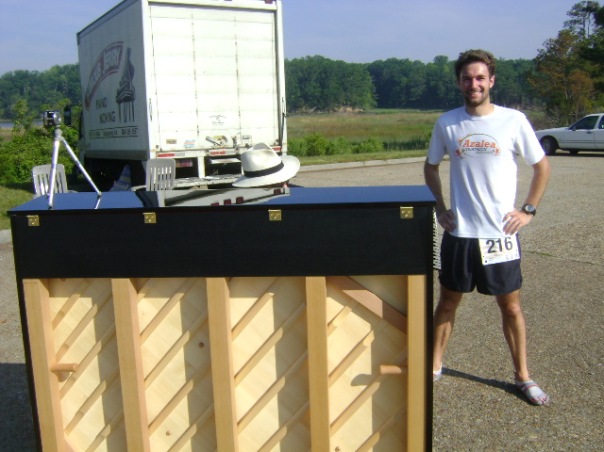 A random piano. He was cool.

Running in the sun was not fun…it was getting HOT at this point. Thankfully parts of the concrete road were in the shade so we were able to stay relatively cool. 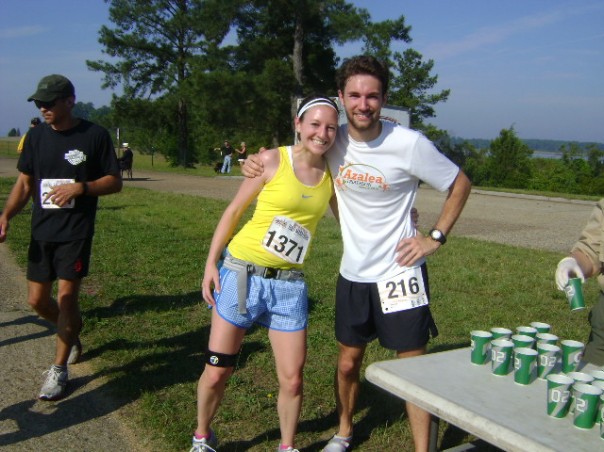 A lady thought our photo taking was funny and offered to snap this shot at the turn-around.

Heat turned up, shirt came off.

Really hating concrete at this point.

We both continued to feel great despite the heat, hills and concrete and I think our fun attitude really made that possible. Neither of us were really thinking about pain, distance or pace and it made the first huge chunk of the race fly by. I also knew that I only had to average faster than a 10:30 pace to beat my PR.

Around mile 11 I started to feel the burn in my legs. I wasn’t hitting a wall or anything, but the long rolling hills were taking a bit of a tole. We stupidly ran a longish hill around mile 9 at a 9:08 pace which I think sucked some life out of me. Endurance-wise I was feeling like a rock star but I could feel my legs getting fatigued. I chugged Gatorade and water (like I’d been doing throughout the race) and hoped it would give me a little boost. 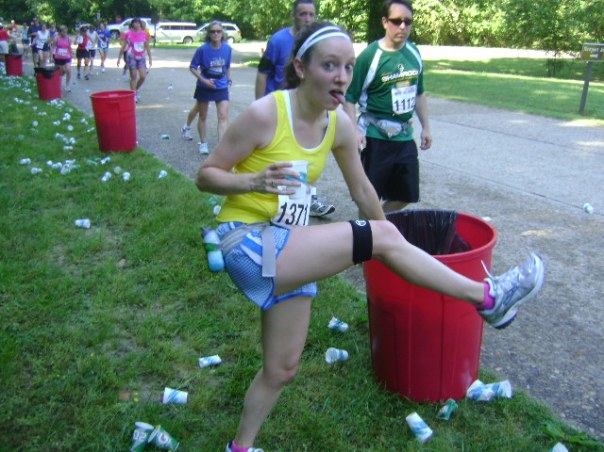 Trying to trick the pain with dynamic stretches.

And then came mile 12. Tristan told me slow down and save energy but I had a hard time listening. I was running somewhere in the 8:30s for the first little bit of mile 12 but my legs were NOT having it. With about a half a mile to go I literally had to stop in my tracks. My legs were burning and tired and were screaming for a break.

I don’t know if I was hitting a wall or what, but it sucked. A brief walking break and the fact that there were no more hills really helped even things out. The last part of the race was around the track at the William & Mary stadium and I was jumping for joy that it was FLAT. 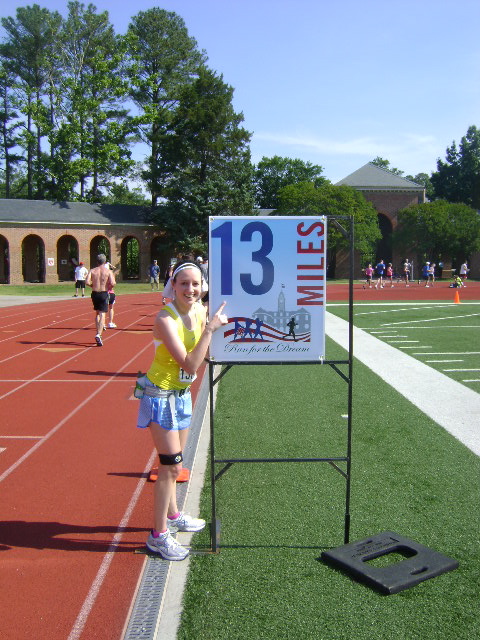 Semi fake smile. Hating my legs but loving the end.

We officially crossed the finish line in 2:11:03. Tristan did exactly 2 training runs for this race, so it wasn’t a PR for him but we were both really happy with our time considering all our our photo ops, the hills, concrete and heat. 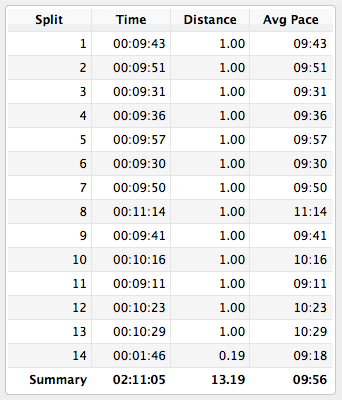 Going into the race I thought it’d be MUCH flatter. The elevation profile on the website made the course look like a piece of cake. Clearly I need to train on hills a bit more.

For some reason this didn't scare me. From the race website.

Anyways, the post race festival was ridiculously fabulous. It was extremely well coordinated and they had A LOT of goodies for runners. It was also easy to find our “fans” and a spot in the shade. I was very impressed.

In addition to those goodies we also got two beers, a BBQ sandwich and unlimited amounts of chocolate milk. They had a band playing as well as other running vendors. The space never got too crowded (it was on a lawn at William and Mary) and we easily found a spot to enjoy the goods.

Once we were fed and stretched we drove back to the hotel to shower before heading to Busch Gardens. Yet another perk of this race…our registrations included FREE admission to the theme park as well as a meal/drink voucher. A regular park pass is somewhere in the $65 range, so the half marathon fee totally paid for itself. They also offered a 15% discount for friends and family, although we found a better deal online.

Theoretically the Busch Gardens pass would have been more awesome had we not had to use it on race weekend. Walking around the park for 7 hours after running a half marathon full of hills was not exactly easy on the legs. I ended up sitting out a lot of the rides because I couldn’t handle standing in line for 15-20 minutes at a time. Luckily the people watching at Busch Gardens  is highly entertaining so I was happy to park my sore butt on a bench.

Overall it was a super weekend and a super race!

← The Story of Us, Part Deux
Race Pics →